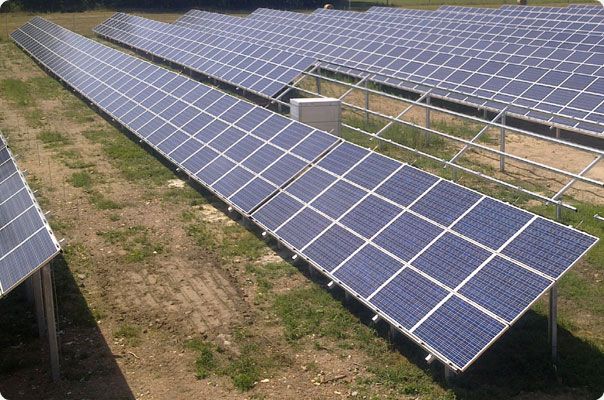 Photovoltaic is a transformation of sun light into electricity. The term „photovoltaic“ comes from the Greek meaning „photo“ – light, and „volt“ – unit of electric potential. The history of PV dates back to 1839, when the first photovoltaic effect was discovered by a French physicist Alexandre Edmond Becquerel. It toke some time – after more than 100 years first solar panel was produced in Bell laboratories. At that time solar panels were not as effective as contemporary ones, which reach 17%. And up to 24% (with monocrystalline segmens) is possible to reach in laboratory conditions.

How does photovoltaic work

Photovoltaic is a method of conversion daylight into electricity. It is formed in photovoltaic panels, that are divided in these basic types:

Base is created by a steamed silicon layer. Effectiveness of the panels range from 4 to 8%. These panels are the cheapest and exploitable in spacious places.

Silicon pad is the basis of these panels. Panels  consist of large amounts of small polycrystallines. Effectiveness range from 10 to 14%. Their production is cheaper and faster than monocrystalline panels´.

The base forms a silicon pad too. Silicons are bigger than 10 cm and are produced from melted silicone in form of bars average – to 300mm. These are cut into thin slices (pads). Effectiveness range from 13 to 17%.

Solar panels consist off these types of panels. Panel is composed with solderes connections. Lower part  is protected by a strong board (TEDLAR) and upper part by polish unbreakable glass.  So they are able to withstand  extreme weather conditions such as hailsorm. In today´s marketplace there are many solar panel manufacturers.  They differ in proportions, effectiveness and and price naturally.

The most efficient and expensive solar panels are made with Monocrystalline cells. These solar cells use very pure silicon and involve a complicated crystal growth process. Long silicon rods are produced which are cut into slices of .2 to .4 mm thick discs or wafers which are then processed into individual cells that are wired together in the solar panel.

These are not really crystals, but a thin layer of silicon deposited on a base material such as metal or glass to create the solar panel. These Amorphous solar panels are much cheaper, but their energy efficiency is also much less so more square footage is required to produce the same amount of power as the Monocrystalline or Polycrystalline type of solar panel. Amorphous solar panels can even be made into long sheets of roofing material to cover large areas of a south facing roof surface.